So. Apparently there’s a video. A famous one. Made 20 years ago at a concert at the Hammersmith Odeon, London, England. And my drummer boyfriend is a legend - in Ethiopia.

At the Phoenix last week, Toronto, Canada, Aster Aweke, Ethiopia’s Aretha Franklin was to perform. As happens often enough, when musicians travel to Canada from another country, the drummer was turned away at the border. Aster called in said boyfriend to do the show. They go way back, having toured Europe, the US and Africa for a decade or so.

I thought that I might interview her, Aster – 'star' in the Amharic language – as I would be there anyway. She appeared backstage, just a few minutes before stepping on stage, so that didn’t happen. However, something else did. While waiting to go on, the musicians hovered around us, said boyfriend and I.

‘Dani’, said Misgana Mulat, the bass player, ‘we used to study you back home in Ethiopia.’ ‘Yeah,’ Nati Asfaw, the keyboard player said to me, ‘everyone in Ethiopia knows this guy,’ pointing at Daniel. ‘The video. Didn’t he show you?’ he asks me incredulously. Beza Gebre, the drummer who eventually made it over the border said, ‘He’s the reason that I play the drums. We all grew up studying that video.’

It seems that Aster Aweke – Live in London , recorded in 1996, was a seminal work. As one of the first high-quality live concert videos of Ethiopian popular music, it made a massive impression. It played on Ethiopian television regularly. Ethiopians at home and abroad proudly drank it in, reveling in their popular music. ‘It was a wild moment,’ said Misgana. 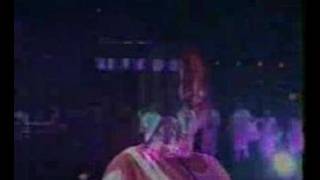 She became a national icon and caught the attention of Island Records, who brought her to the international stage.

The current group of young musicians who play regularly with Aster are all, like her, based in the United States. They hail from Los Angeles, New York, Washington, drawn together by the opportunity to play with this astounding performer. Her career has spanned several decades, performing with the likes of Yousou N’door, Hugh Masakela, Branford Marsalis, and at major festivals and venues around the world. When she steps on stage, the packed house at the Phoenix goes wild. She is every bit as vibrant as when I saw her in downtown Toronto – 25 years ago. Her music, voice, stage presence is firey, intense.

The two drummers share the show – Beza plays with the opening act, Wendi Mack, who plays a mix of Ethiopian pop and reggae. Daniel plays with Aster. He informs me that the bass player is playing some of the same lines that were laid down on that video 20 years ago by Henok Temesgenon. ‘Everyone in Ethiopia knows that those parts,’ the bass player explains. ‘You know that one time, where you hesitated in that one song – we even learn that!’ the drummer laughs.

The show ends. The crowds disappear. The young musicians who grew up studying the video a continent away, gather around for photos. They invite him to come to L.A., Washington, New York, to teach in Ethiopia. ‘Dani, Dani!’ DJ Cheb Cheb, another musician, runs to the car window as we drive off, ‘much respect!’ he calls out.

I’d hoped for an interview with a star and got another story instead. That’s okay, I’ll take a good one whenever it shows up.